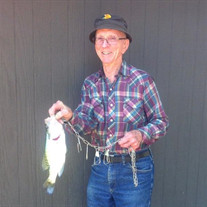 Paul Edward James, 92, of Choctaw passed away Wednesday, January 22 at the Oklahoma Heart Hospital. Funeral services will be held at 10 a.m. Tuesday, January, 28 at the Del City Church of Christ with Jeff Gardner officiating. Burial will be at the White Chimney Cemetery in Stuart, OK. The family will receive friends from 5-7 p.m. Monday evening, January 27th at the Ford Funeral Home, Midwest City. Paul was born July 25th, 1927 in Tiawah, OK to Benton and Beulah Willhoite James. He attended schools in Foyil and Bache, OK. Paul married Leatrice Watkins December 31, 1948 in McAlester, OK. They were married for 64 years before her passing away. He worked in the bakery industry for 44 years; first at the Shipley-Holsum Bakery in McAlester and then at the Rainbo Bakery in Oklahoma City where he retired in 1988. Paul was a faithful member of the Del City Church of Christ and for many years assisted with their Meals on Wheels program delivering meals. He enjoyed working in his garden, watching OU football, and telling jokes, but his greatest passion was fishing, being outdoors and just being with his family. Paul was an amazing, loving and supportive father, grandfather, and great grandfather. He was always at an athletic or musical event supporting his children, grandchildren and great grandchildren. He was Papaw to anyone he met. He was preceded in death by his parents Mr. and Mrs. Benton James, brothers Bill James, George James and sister Ruby James Brown and his wife Leatrice James. He is survived by his son Terry James and his wife Carol of Paris, Texas and daughter Carol and her husband Al Clark of Choctaw; Grandchildren Kristi and her husband Chris Dillinger of Choctaw, OK; John-Paul and his wife Bethany James of Bowling Green, Kentucky; David and his wife Rebecca Traynor of Moore, OK and 6 great-grandchildren- Brandon, Nathan and Ryan Dillinger and Clavel, Josephine and Jude Traynor. He will be greatly missed by all, but we know he is in a better place with Leatrice and now he can Hear!

Paul Edward James, 92, of Choctaw passed away Wednesday, January 22 at the Oklahoma Heart Hospital. Funeral services will be held at 10 a.m. Tuesday, January, 28 at the Del City Church of Christ with Jeff Gardner officiating. Burial will be... View Obituary & Service Information

The family of Paul Edward James created this Life Tributes page to make it easy to share your memories.

Send flowers to the James family.