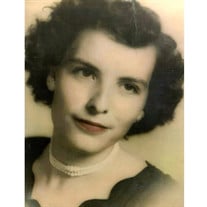 Alma “Phebe” Lue Heisler, 90, passed away on Sunday, January 24, 2021 in Del City, Oklahoma. Phebe was born on March 14, 1930 in Kulliteklo, Oklahoma to Andrew Allen and Lena Leotto Fuller. She attended Haworth High School in Haworth, Oklahoma, James Earl Russell High School of the Southeastern State College in Durant, Oklahoma. Phebe worked for the Oklahoma Publishing company for many years before her retirement. She was a wonderful single mother to four boys who she cared for very much. Her little family grew to a very large family with lots of grandchildren and great-grandchildren. She loved her family dearly and unconditionally. On February 14, 1986, Phebe married James Edward Heisler and spent 28 years with him before his passing in 2014. Phebe was an amazing inspiration to others, and she lived her life in service to Christ witnessing to others through her kindred spirit, compassion, and love. She was a part of the Eastern Star Chapter No. 471 O.E.S. in Haworth, Oklahoma. She enjoyed many hobbies which included basketball, camping, fishing, traveling, shopping, collecting rocks, crocheting, skip bo, bingo, word search, coloring, puzzles, and dominoes. She had a sweet tooth for chocolate shakes and milky ways. Phebe is survived by her sons, Steve (Estelle) Tapley, Alwin (Sherry) Tapley, Dalwin (Cathy) Tapley, Eugene (Terri) Holloway; 12 grandchildren; 21 great-grandchildren; and brother Travis (Flonnie) Fuller of Garland, Texas, and several nieces and nephews. She is preceded in death by her husband, James E. Heisler; parents, Andrew Allen and Lena Leotto Fuller; siblings, Eugene, Oleta, Henry, Gladestine, Cortez, Sherrell, Cleatus, and Aurelia Ann. In lieu of flowers, memorial donations may be made to Sunnylane Family Church in Del City, OK.

The family of Phebe L. Heisler created this Life Tributes page to make it easy to share your memories.

Send flowers to the Heisler family.