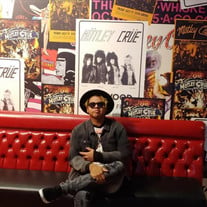 Remington “Remi” Wilson-Fredrick Stephens, 23 years old and a resident of Del city passed away on Sunday, May 23rd, 2021. Remi was born on November 29th, 1997, to Shannon Stephens and Teressa Tainpeah. He was Creek and a Wichita tribal member. Growing up with his brothers and sister, Matthew Sparlin, Elias Porter and Amber Sparlin he began to show greatness as the one who took 1st place in a contest as the cutest baby one year old in Oklahoma. After graduating from Del City high school, he worked in the family business then Remington went onto work at Vaper Express. Remi loved music and instruments as he was a musician, who began playing the drums, guitar, and bass. He was self-taught. His love for instruments led him to become an amateur Guitar Luthier. Some of his hobbies included video games, concerts, cars, and magic, he was a Penn and Teller fan, having seen them in Las Vegas. As a child, Remi was a member at the Middle Creek #1 Indian Baptist Church and baptized at Falls Creek by Joe Wallace Bruner. Remi is survived by his dad Shannon Stephens, mom Teresa Tainpeah, Grandmother Maggie Stephens, brother Matthew Sparlin, and brother Elias Porter, sister Amber Sparlin, his best friends Keoni, Kyle, Chris, and Bowen, 3 nieces, 1 nephew, numerous cousins, sister-in-law Natasha Sparlin, numerous aunts, and uncles, along with numerous other friends. Remi is preceded in death by grandfather Charles Stephens and grandfather John Oliver Tainpeah, grandmother Dorothy Jean Davis, great uncle Richmond Bruner and his cat Skitzhoe. A Cashapp fund is available. $money1dads This account will help defer costs but in no way is expected, Remi was a simple giving person and he felt bad to ever ask for help. His life was helping others.

Remington &#8220;Remi&#8221; Wilson-Fredrick Stephens, 23 years old and a resident of Del city passed away on Sunday, May 23rd, 2021. Remi was born on November 29th, 1997, to Shannon Stephens and Teressa Tainpeah. He was Creek and a Wichita... View Obituary & Service Information

The family of Remington "Remi" W.F. Stephens created this Life Tributes page to make it easy to share your memories.

Send flowers to the Stephens family.