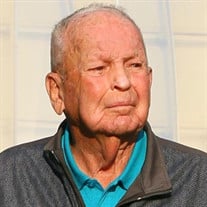 Robert Anderson (Bob) Myers was born August 31, 1923 in Nowata, Ok, and died July 31st, 2020 in Oklahoma City, just one month shy of his 97th birthday. Bob graduated from Nowata High School in 1941 where he was a star football player for the Nowata Ironmen. After high school he proudly served his country overseas in World War II from 1943 through 1946 in the United States Army. In 2017, at the age of 94, Bob and nine family members visited Austria and Germany, including Bad Tolz, Germany, where he was stationed after World War II to investigate war crimes under General George Patton. As a part of the Greatest Generation, Bob was cherished for his amazing memory and storytelling ability. Upon his return from the war Bob attended the University of Oklahoma, graduating in 1948. Bob returned to Nowata and married Charlotte Ann Dugan on June 30, 1946. They welcomed Robert Jr. (Andy) in 1950, Mary Pat in 1952 and baby Ann in 1954. Bob lost his first wife Charlotte in 1970 and relocated to Midwest City in 1972. Bob married the second love of his life, Norma Leah Odell Sheffey on August 18, 1974 and welcomed Sandy, Rhonda and Keith into his life. Bob and Norma loved to travel and enjoyed taking road trips all over the United States and Canada. Bob is preceded in death by his parents Leola Anderson and Garold Lennox Myers; first wife Charlotte, second wife Norma, infant daughter Ann and five siblings. He is survived by five children, Dr. Andy Myers of Phoenix, AZ; Mary Pat Warren and husband Larry of Edmond, OK; Sandy Clabes and husband Brandon of Choctaw, OK; Rhonda Moser and husband Phil of Midwest City, OK; and Keith Sheffey of Midwest City, OK; seven grandchildren, Molly Largent (Mike); Kate Howell (Michael); Emily Fiaccone (Shaun); Collin Clabes; Morgan Clabes and Gabby Clabes, and Connie Moser (Amber); and great-grandchildren Mason, Lucy and Elliott Largent, Scout and Charlotte Fiaccone, Joey and Matteo Moser and many beloved nieces and nephews. Bob attended Meadowood Baptist Church and enjoyed his close friendship with Pastor Bob Rutherford. He was an accomplished golfer, making a hole-in-one at the age of 88. Bob loved spending time at John Conrad Regional Golf Course with his many friends there. He was an avid OU fan and especially enjoyed watching Sooner football and attending basketball games with his nephew Gary. Bob loved taking long drives with his son Andy and spending time with his grandchildren and great-grandchildren. He was known for being stubbornly independent and having an insatiable sweet tooth, which meant he might just have four milkshakes in one day if that’s what suited him. Bob was an incredible gift to all who knew him—the foundation of his large family, and he showed it daily with his love, support and humor. Bob’s family is thankful for the wonderful care provided by Becky Sexton and Sandy Reid for the last year of his life, as well as his physician Dr. Ryan Biggers. **A memorial service will be held at a later date.**

Robert Anderson (Bob) Myers was born August 31, 1923 in Nowata, Ok, and died July 31st, 2020 in Oklahoma City, just one month shy of his 97th birthday. Bob graduated from Nowata High School in 1941 where he was a star football player for the... View Obituary & Service Information

The family of Robert (Bob) Anderson Myers Sr. created this Life Tributes page to make it easy to share your memories.

Send flowers to the Myers family.