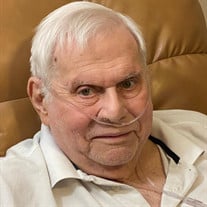 Robert John Hanna Sr. March 13, 1939 – January 18, 2022 Robert (Bob, Bear) Hanna was born to Helen (Kornak) Koski and Joseph Koski in Detroit Michigan. A few years later Bob was adopted by his step-father John Hanna. While his early life was quite difficult, it burned into him the importance of stability and family. In 1956, at the age of 17, Bob decided he needed a change, so with his mother permission he joined the Air Force. For the next 21 years, he proudly served his country. In 1962, Bob met and married the love of his life Janice Hanna. Shortly after marriage, in 1963 Bob got stationed in Seville, Spain. While there, they had two of their three children, Robert and Steven. On returning to the States, Marci was born in 1968, while they were in Dayton Ohio. During his military service he rose from an Airman to Master Sergeant, and was stationed in Okinawa, Spain, Korea and England as well as several Bases in the United States including Tinker. Robert worked in telecommunications starting in Morse intercept and ending in Satellite Communication. He was awarded the Air Force Commendation Medal, Meritorious Service Medal and was recognized as part of the Apollo re-entry program. After retiring in 1977 Bob worked a variety of Jobs until he got on with the Federal Aviation Administration, where he again worked in communications. During his Federal service, Bob obtained an Associate’s degree, and served on several national boards and committees. After 19 years of federal service Bob retired once again. Sometime while working at the FAA, Bob stumbled upon a job that brought him immense joy. He was hired by Santa Claus to be his personal representative. Working closely with the North Pole, he was assigned to Crossroads Mall, where for over 10 years he reported straight to the big guy himself. He took this position very serious and researched all the latest gifts and toys. Outside of work Bob was always busy helping his kids, as a coach, scoutmaster, Chapter Dad, Rainbow Dad, Chauffer or biggest fan. He also was introduced to Masonry by his neighbor JB Stratton. Bob joined Del City Masonic lodge in 1973. He served as Worshipful Master of his lodge and was secretary for many years. He also joined Scottish Rite, York Rite, Eastern Star, Amaranth and Shrine. For his work with Masonic organizations Bob received many honors including becoming a 33rd Degree Mason, the Honorary Legion of Honor for DeMolay, Advisor of the year, and becoming a Deputy Member of the International Supreme Council of DeMolay. He received the Grand Cross of Color from his work and support with the International Order of Rainbow for Girls. Bob held Grand offices in the Oklahoma Grand Lodge, and Grand Chapter of the Eastern Star. After 55 years of marriage Bob was preceded in death by his wife Janice and his daughter Marci Kelley. Bob is survived by his sons Robert Hanna Jr and his wife LeAnn and Steven Hanna and his wife Gretchen, and his son in law Scott Kelley. His seven grandchildren Hanna Mast and husband Nathan, Cody Kelley, Alex Hanna, Darby Hanna, Kaleigh Dean, Morgan Hanna and Brendan Hanna. One great grandchild Addie Rose Kelley and a host of extended family and friends. In lieu of flowers, Bob would ask for donations to either the Oklahoma Medical Research Foundation or the Guthrie Scottish Rite Building Fund.

The family of Robert John Hanna Sr. created this Life Tributes page to make it easy to share your memories.

Send flowers to the Hanna family.