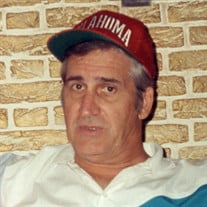 Ronald (Ron) Edward Bernack, 85, of Midwest City, Oklahoma passed away Monday, September 2, 2019 at OU Medical Center in Oklahoma City, Oklahoma. Ron was born on November 30, 1933 in Scranton, Pennsylvania to Edward A. Bernack and Gladys I. Bernack (Nichols). He has one brother, Dale Chase of Scranton, PA. Ron grew up in Scranton, Pennsylvania where he graduated from Technical High School in 1952. That same year, he enlisted in the United States Air Force which would be the start of Ron’s adventurous lifestyle. His first assignment he went to Korea after basic training. On October 15, 1955 in Raton, NM Ron married his first wife Lois A. Anair-Segalini. After their marriage, Ron and Lois made their journey to Winooski, Vermont where they would build their family from 1955-1959. Ron was in the military for 24 years so this lead to many big moves with his family over those years which included overseas assignments to Japan for 8 years on 2 separate tours as well as the Philippines for 4 ½ years on 2 different tours. He also had stateside assignments at Ent AFB, Colorado; Winooski, Vermont; Andrews AFB, Maryland; Everett, Washington; as well as Tinker AFB, Oklahoma. Ron enjoyed serving in the Air Force and later retired in 1976 with an Honorable Discharge as a Master Sargent. After his 24 years of service, Ron decided to go back to school and attended Rose State College in Midwest City, OK from 1976-1978 while residing in Moore, OK. Ron worked at FAA (Federal Aviation Administration) as a security officer in Oklahoma City, OK for more than ten years. He made his way to Choctaw, OK from 1979-1987. He met Linda M. Florence and the two moved to Midwest City, OK where he would live for the next six years. On November 4, 1988 Ron remarried to Linda in Eureka Springs, AR whom he was married to until his death. From 1993-2012 Ron and Linda lived by Grand Lake in Grove, Oklahoma where he worked as a lawn engineer at Cowskin Retirement Village and then later decided to move back to Midwest City where him and Linda were living for the final years of Ron’s life. Ron not only dedicated his life to serving his country, but he also dedicated his life to his family. He loved getting to spend time with his family and enjoyed dancing, going to the casino, and was a very competitive and talented bowler. He also loved the water, whether it was a lake, or a pool Ron wanted to be there. When Ron was relaxing some of his favorite shows to watch were Gunsmoke and Seinfeld. He also loved OU football, the Pittsburgh Steelers and the PGA. Ron is preceded in death by his parents Edward A. Bernack (2005) and Gladys I. Chase (Nichols) (1998); son Ronnie Bernack (2010); stepson Brian Florence (2018); and mother-in-law Wilma Lee Brown (2009). He leaves behind the family he loved so well: spouse Linda M. Bernack of the home in Midwest City, OK; daughters Marla Jeannine Garbutt and her husband Don of Midwest City, OK, Michelle Gail Underwood and her husband Steve of Yukon, OK, Tryna Lynn Teague and her husband Ron of Norman, OK; step children Sheila Wilson and her husband Randy of Moore, OK, Brett Florence and his wife Trese of Norman, OK; grandchildren Aaron Burchett, Billy Teague, Tina Dube, Hiliary Griffith, Jerrad Underwood, Sean Garbutt, Skyler Teague, Dylan Wilson, Chelsea Bright, Tristan Florence, and Marjorie Florence; great grandchildren Presley Burchett, Connor Burchett, Kynlee Garbutt, Zayden Edmondson, Tatum Garbutt, Raelynn Griffith, Teagen Griffith, Kaylee Dube, Nicholas Dube, Parker Wilson, Riley Wilson, and Jackson Bright; and brother Dale Chase. A memorial service will be held at 10:00 AM on Saturday, September 7, 2019 in Midwest City, OK at Ford Funeral Service in the Candlewood Chapel with minister Dude Youngblood officiating. In lieu of flowers, the family suggests and appreciates donations to be made to American Cancer Society and/or American Heart Association.

The family of Ronald Edward Bernack created this Life Tributes page to make it easy to share your memories.

Send flowers to the Bernack family.