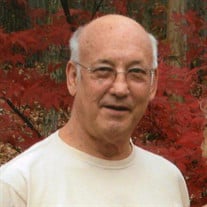 Ronald Lee Craven passed away peacefully on February 11, 2022. Ron was born March 15th, 1941 in Alluwe, Oklahoma. He graduated from Del City High school class of 1959, and served that class as president, as well as acting as chairman of the reunion committee for many years, cultivating lifelong friendships with several classmates known each other since childhood. Ron cherished those friendships. Ron continued to form lifelong bonds while honorably serving the country he loved in the United States Navy from 1960 to 1964 as a Communications Technician stationed in Istanbul, Turkey. He returned home to the Oklahoma City area, where he married Beatrice Ann Edwards in 1965, who he cherished and loved through his days. Graduating from Oklahoma University with a Psychology Degree, he began a meaningful career in Human Resources. He was responsible for staffing and direction of human resources at several facilities in places such as Ardmore, Chickasha, and Shawnee, Oklahoma; and Little Rock and Rodgers, Arkansas. The family has been blessed to hear many stories of his kindness and fairness throughout his career. Ron and Ann have two sons, Jeffrey Lee Craven and wife Marla of Chicago, Illinois; and Jerold Allen Craven and Fiancée Lisa of Celina, Texas. Ron and Ann were blessed with two grandsons, Isaac Edward Craven and Nathaniel James Craven, also of Celina. Ron was preceded in death by his father Beryl Lahuma Craven and Mother Mary Pearl Craven. Ron was kind, brave, loving, tough, modest, smart, and a true patriot. Many friends, neighbors and loved ones have expressed the love and kindness this man showed to all. Above all, the family knows that he never bragged on himself or his many accomplishments, but rather, bragged on his grandsons, his sons and their wives and their families, and Ann. Our family would like to extend very deep appreciation to the amazing team of Frontier Hospice during the final year of Ron’s life. A memorial service will be planned.

Ronald Lee Craven passed away peacefully on February 11, 2022. Ron was born March 15th, 1941 in Alluwe, Oklahoma. He graduated from Del City High school class of 1959, and served that class as president, as well as acting as chairman of the... View Obituary & Service Information

The family of Ronald Lee Craven created this Life Tributes page to make it easy to share your memories.

Send flowers to the Craven family.