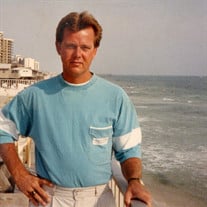 Ronald “Bruce” Lippe, 64, of Midwest City, OK, died of cancer at the VA, on Dec. 4, 2019. Born on Jan. 15, 1955, at St. Anthony’s Hospital. Bruce was the 6th of 11 children, born to Margie and Carl Lippe. His siblings remember him most as giving, supportive, a natural leader, a good friend, and always there to help anyone who needed anything. He attended St. Philip Neri through 7th grade, transferred to Jarman Jr. High for 8th grade, and to Monroney Jr. High for 9th grade. Thus, he knew “everyone,” while attending Midwest City High School, where he was a very proud “Bomber.” Immediately after graduation, he joined the Marine Corp, where he served honorably until his discharge in late 1975. When asked what his favorite memory of the Marines was, he replied, “all of it.” Lance Corporal Lippe served in the US Embassy, in Sophia, Bulgaria, and was a soldier “on the wall” during the “Fall of Saigon.” Bruce returned to MWC, where he attended school and earned an associate’s degree. He trained as an EMT, and worked as a “scrub tech.” Later, he became Asst. Manager, (and a “clothes horse”) at Napoleon Nash Menswear. In 1981, January, he was hired by NL industries Atlas Bradford division, and transferred to Houston. Stationed in Corpus Christi, TX after training, he worked as a pipefitter, overseeing drilling in south TX, and offshore. On June 26, 1981, he married Patricia Susan Campbell, and for 38 years they loved and enjoyed an eventful life together; entertaining, dancing, and volunteering for various charities. Bruce was a Big Brother to “Mark,” an autistic man for 4 years. However, Bruce was no “angel,” as he’d be the first to attest. During younger years Bruce and brother David were playing with matches. A mall fire began, near the backyard playhouse. Brilliantly, they covered it with…newspapers, and went into lunch. When mom Margie said, “I smell smoke”…Bruce calmly , innocently replied…”oh yea, the playhouse is on fire”…sending mom Margie into hysterics. After the oil “bust,” Bruce became a Houston Police Officer in 1985. It was his favorite job, and he received numerous commendations. Eventually, they returned to MWC, where Bruce “re-invented” himself, becoming proficient in home repair, plumbing, and sewer clean outs. By word of mouth alone, his self-employed “Repairs by Bruce” consisted of over 300 private customers, and 11 corporate accounts. He was preceded in death by his parents, Margie and Carl Lippe; siblings David and Linda; sister-in-law Mischelle and brother-in-law Joe. He is survived by his wife Susan; son Dallas; daughter Morgan Dalton (Larry) of OKC; 6 brothers Randy (Myrna), Dennis (Karen), John (Josie), Greg (Robin), Mike (Mischelle), and Robert; 2 sisters Patricia Taylor (Patrick) of Choctaw and Cindy (Joe) of OKC. He is also survived by his mother-in-law Pat Campbell; brothers-in-law Myers D. Campbell IV (Eva Marie) of Tulsa, Dr. John W. Campbell of Edmond, and A. Matthew Campbell (Danella) of Jacktown; his grandchildren Savanna, Kelcie, Bryce, Vivian, and Olivia; 32 “special" nieces and nephews, over 150 grand and great grand nieces and nephews; and multiple cousins across OK and TX. Bruce and Susan thank, sincerely, all the dedicated caregivers at the VA, involved in Bruce’s care since his diagnosis in 2014. Most recently 2E nurses, and the Palliative Care Unit. You are special. In lieu of flowers, please give a memorial in Bruce’s name to St. Philip Neri Catholic Church ATTN: St. Vincent de Paul Society (1107 Felix Pl. Midwest City, OK 73110). Bruce enjoyed having a good time, doing anything. In his last 5 years, he began his battle with cancer. He underwent a laryngectomy and had a permanent tracheostomy. He tolerated cancers many challenges and insults in his own way, always wanting to not worry family, or be a burden. He is/was my best friend and confidante. The only man who could make my blood boil or my heart sing and did much of BOTH. I LOVE you, Bruce Lippe.

The family of Ronald Bruce Lippe created this Life Tributes page to make it easy to share your memories.

Send flowers to the Lippe family.