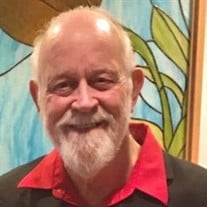 On Tuesday, December 3, 2019, Roy H. Gray Jr., loving husband and father, passed away at the age of 64. Roy was born May 26, 1955 in Toledo, OH to Roy Sr. and Bonnie (Hahn) Gray. He was the youngest of four children: Arthur, Richard, and Sandra. He attended John F. Kennedy High School and studied at American River College in Sacramento, CA. He served four years in the Navy during Vietnam, joined the Air Force, and entered the civilian workforce at McClellean AFB as an Aircraft Ordinance Systems Mechanic, later transferring to Tinker AFB in 1997. He later became a MIPR specialist. He retired after 43 years of service with the federal government, then re-entered as a contractor after two days of retirement. A beloved husband to Kathleen, they renewed their wedding vows after 30 years. He would joke that he was “concerned she would say no the second time around.” He was a loving father to Alexis, Christopher, and Genevieve. He was a Boy Scout leader, supporter of Girl Scouts, a coach. He portrayed Santa throughout the years. He was a member of McFarlin Memorial UMC. When asked how he was doing, he would reply, “Better than I deserve.” Roy was known for his quick wit, infectious smile, wealth of knowledge, and shared many stories and yarns. Family was first and foremost. He was a very giving and caring person. Roy was preceded by his parents, Roy and Bonnie, and his sister Sandra Gray Preston. He is survived by Arthur Gray and wife Hong, Richard Gray and wife Karen, and many nieces and nephews. Please consider making a donation in his name to St. Jude’s Children’s Research Hospital or the Pulmonary Fibrosis Foundation.

The family of Roy H. Gray, Jr. created this Life Tributes page to make it easy to share your memories.

Send flowers to the Gray, family.