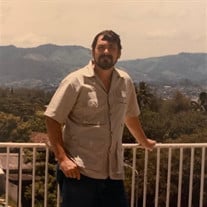 Roy Ross White Jr. was born June 25, 1947 in Oklahoma City to parents Roy Ross, Sr. and Dorothy White. Roy attended Del City public schools up until his senior year of high school where he transferred to Oklahoma Military Academy (OMA) in Claremore, to complete high school and one year of junior college. Upon graduation Roy joined the U.S. Marine Corps in June 1966 and immediately left for Camp Pendleton in San Diego, California. After boot camp Roy returned to married Karen Jantzen on October 1966. In March 1967 Roy was then transferred to Camp Lejeune in North Carolina where he remained stationed until 1969 when he was deployed for combat in Vietnam. Roy returned from Vietnam in April 1970 and after a 4-year stint in the Marine Corps was honorably discharged. While in combat during Vietnam, Roy received numerous medals and ribbons. National Defense Service Medal, Vietnamese Service Medal, Vietnamese Campaign Medal, Good Conduct Medal, Purple Heart, Combat Action Ribbon, and Vietnamese Cross of Gallantry Upon discharge from the U.S. Marine Corps, Roy and family moved to Del City, Oklahoma, where his first daughter Michelle was born. On May 1973, Roy joined the Navy and became part of the U.S. Navy Construction Battalion known as the Seabees. Upon enlistment Roy received orders to Taipei, Taiwan HSA Compound Base where his second daughter Angela was born. Roy and family remained in Taiwan until he was transferred to the Aleutian Islands in Adak, Alaska. In June 1977, Roy received what would become his final military station orders to Port Hueneme in Oxnard, California. Roy and family remained there until October 1979 when Roy medically retired as a Master Chief Petty Officer due to injuries and illness suffered in the Vietnam war. Roy and his family moved back to Midwest City, Oklahoma and his third daughter Jennifer was born. Roy began his civilian career working as a Boiler Mechanic, Boiler Pump Service Engineer, HVAC Technician and Pipe Fitter/Inspector within Oklahoma City. In July 1985, Roy decided to venture out of the U.S. and become a U.S. government contractor for the U.S. State Department. Roy’s first assignment was Supervision over the installation of fire protection and alarms in Madrid Spain, San Salvador and Bonn Germany. In July 1987, Roy took an assignment to Prague, Czechoslovakia and Warsaw, Poland to perform work on their U.S. Embassy. Roy then resided in Germany where he worked as a contractor and this is where he met the love of his life Pia Ramel. Roy and Pia moved back to Blanchard, Oklahoma and Roy worked in HVAC until Roy decided to take an assignment to Cairo, Egypt in May 1989. Roy trained Egyptian Air Force Officers in the operation of HVAC and base utilities systems until October 1990. November 1990, Roy then took another assignment to Riyadh, Saudi Arabia working on the King Khalid International Airport where he supervised 20 Saudi Nationals and 60 nationals in placing and repairing HVAC units at the airport. In November1992, Roy was offered another position within Saudi Arabia where he was the direct supervisor of 10 foreman, 96 mechanics, shop repair and administrative staff until January 1995. Roy returned to Blanchard, Oklahoma and became the Mechanical Systems Supervisor for Norman Regional Hospital until he retired in 2008. Roy had many hobbies including his military memorabilia collections and loved traveling to gun and cartridge shows. He was a 20 year member of the International Ammunition Association, Inc and the Kansas Cartridge Collector’s Association. Roy developed a love for dogs and even raised chickens and goats on his acreage. Roy passed away from a lengthy illness stemming from his military service and he fought like a soldier to the very end. Roy is proceeded in death by his parents Roy and Dorothy and x-wife Pia. Roy is survived by his 3 daughters Michelle of Del City, Angela Jones and husband Chris of Mustang and Jennie and boyfriend Derek of Mustang. His sister’s Terri Newnam of Del City and Susie Hargrove and husband Ronnie of Midwest City and 7 grandchildren and 1 great grandchild, 1 niece and 3 nephews. And dear friend and caregiver Michelle and numerous friends.

The family of Roy Ross White Jr. created this Life Tributes page to make it easy to share your memories.

Send flowers to the White family.