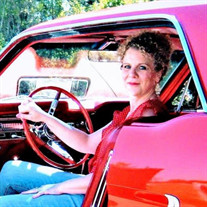 Shelley Kay Higgins, “Mimi”, Age 54 of Midwest City, left our arms and went home with Jesus on November 29, 2021. Shelley was born in Midwest City, on November 26, 1967, to Bonnie Jean Little. Shelley and Scott began dating on January 12, 1985 and it didn’t take long for them to know they were absolutely meant for each other. Shelley graduated from Del City High School in 1986. Shelley married her high school sweetheart and love of her life on December 19, 1987. On September 13, 1993, She gave birth to their daughter Morgan. Shelley was the most loving and devoted wife and mother to Scott and Morgan. Morgan and her husband Dylan, have two children, Malia and Parker. Those precious babies were the light of her life and brought her so much joy. Being a Mimi was her calling and where she shined the most. Shelley worked in the dental field for over 34 years in positions ranging from assisting, front desk, to office management. She loved gardening and working in the yard, antiquing on weekends, and frequent Sunday drives with her husband in the same mustang that was so much a part of their relationship from the very beginning. Shelley is survived by her husband Scott Higgins of Midwest City, her daughter, Morgan Johnson and husband Dylan Johnson of Del City, two precious grandchildren, Malia and Parker. Sister Cheri Gibbs and husband Mike Gibbs of Fort Gibson, OK. brother Terry Mauk of Del city, OK, Loving niece Candace Marestein of Moore, OK, Brother Ricky Mauk, Sister Lisa Singleton of Tulsa, OK, sister Renae Rogers of South Dakota. Many other precious nieces, nephews, family, friends, and beloved co-workers. Shelley, gone too soon, was loved so much by many and will be greatly missed. She is preceded in death by her Mother, Bonnie Jean Little, her Dad JD Little, her Father-in-law, William Dale Higgins, and Mother-in-law, Linda Sue Higgins ,and her precious beautiful friend, Toni Jensen. Shelley was an organ donor and always made that clear when asked. She was a loving and giving person to the very end. There will be a viewing Thursday, December 2nd from 12:00 - 8:00. Funeral service will be at Ford Funeral Service on Friday, December 3rd, 2021 at 11:00 with interment at Sunnylane Cemetery.

The family of Shelley Kay Higgins created this Life Tributes page to make it easy to share your memories.

Send flowers to the Higgins family.