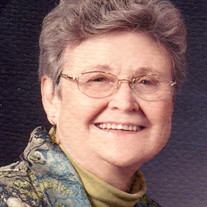 The final resting place for Sidonia “Sid” Busby Grimes will be Rose Hill Cemetery near Terrell, TX and a graveside service will be held at 1:00 pm on Thursday, March 4, 2021 Prior to Sid's passing she expressed a desire to share the following poem entitled "Afterglow" by Helen Lowrie Marshall and one of her favorite scriptures "II Timothy 4:7-8." I’d like the memory of me to be a happy one. I’d like to leave an afterglow of smiles when life is done. I’d like to leave an echo whispering softly down the ways, Of happy times and laughing times and bright and sunny days. I’d like the tears of those who grieve, to dry before the sun; Of happy memories that I leave when life is done. Afterglow by Helen Lowrie Marshall I have fought a good fight, I have finished my course, I have kept the faith: Hence forth there is laid up for me a crown of righteousness, which the Lord, the righteous judge, shall give at that day: and not to me only, but unto all them also that love his appearing. II Timothy 4:7-8 For further details see www.fordfuneral.com Rose Hill Cemetery can be reached by driving north from Kaufman, Texas, 5.2 miles on FM 987, turning right on FM 2578 for 1.1 mile and turning left on Count Road 273. Rose Hill is .3 miles on the left. Remembering Sid Grimes Sidonia Grimes passed away on October 19, 2020 at age 90 in Oklahoma City, OK. Sidonia “Sid” (Busby) Grimes was born in Van Alstyne, Texas on December 24, 1929 to Sidney Franklin Busby and Rosa Florence (Robinson) Busby, the third of six children. Sid married J A Grimes in 1948 at age 18 in Kaufman, Texas. They moved to Dallas, Texas, where she worked for an insurance company while J A attended law school. J A joined the FBI as a Special Agent in 1950 and they moved to Washington, DC, Baltimore, MD and New York City, NY. In 1958 they were transferred to the FBI Field Office in Oklahoma City. Sid enrolled in what is now the University of Central Oklahoma and received a Bachelor’s in Education and was salutatorian of her class in 1967. She became a second-grade teacher and taught in the same classroom for nearly 20 years at Townsend Elementary School in Del City, OK. In 1974 she was named the teacher of the year in the Mid Del School District. She was a dedicated member of Crown Heights Baptist Church where she served terms as Treasurer and for 25 years was the director of the church nursery. Sid and J A vacationed for 50 years at Blue Creek Lodge in Wagon Wheel Gap, CO on the headwaters of the Rio Grande River where they enjoyed many wonderful days with friends and family. In later years they would spend much of the summer there. Sid had been married to J A for 64 years when he passed away in 2012. All five of her siblings preceded her in death. She was the beloved mother of Ron Grimes of Fairfax, VA and Gary Grimes of Oklahoma City, mother-in-law of Sue Grimes, of Fairfax, VA and grandmother of Jay Grimes (Cori Ast) of Washington, DC and Michael Grimes (Emily Grimes) of Arlington, VA Following a stroke that she suffered in 2013, she resided at The Mansion at Waterford Assisted Living in Oklahoma City. The family wishes to express sincere thanks and much appreciation to the staff of The Mansion who helped care for her during her time there. In lieu of flowers please consider a donation to Crown Heights Baptist Church, 4802 N. Western Ave., Oklahoma City, OK 73118 or a donation to The Books for Kids Foundation at https://booksforkids.kindful.com/

The final resting place for Sidonia &#8220;Sid&#8221; Busby Grimes will be Rose Hill Cemetery near Terrell, TX and a graveside service will be held at 1:00 pm on Thursday, March 4, 2021 Prior to Sid's passing she expressed a desire to share... View Obituary & Service Information

The family of Sidonia Grimes created this Life Tributes page to make it easy to share your memories.

The final resting place for Sidonia “Sid” Busby Grimes will be...

Send flowers to the Grimes family.