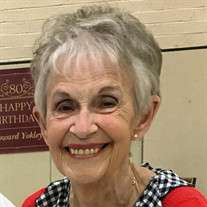 Vanita Faye Weaver (nee Ward) entered the arms of Jesus on July 2, 2019. She was born on October 17, 1939 in West Monroe, LA to Ruth A. and Silas S. Ward. Vanita spent her childhood in Louisiana, Texas and Oklahoma where she graduated from Del City High School in 1958. Most recently she resided in Midwest City. In high school she was active in D. E. and served as president of the D. E. Club for 2 years. She loved singing in the high school choir and in church quartets at her church, Capitol Hill Church of God. March 7, 1959, she married Howard A. Yokley of Del City, OK and the couple raised two children, Marilyn Faye and Randall Yokley, in their 29 year marriage. Vanita was a working mother and started working at 15. She worked for Capitol Hill State Bank until 1959 then worked for T. G. & Y. (Tomlinson, Gosselin and Young) where she was promoted to Assistant Manager of Personnel and Payroll for 21 years. In March of 1989, Vanita married Leonard “Bud” Weaver and was able to fulfill her love of travel. She and Bud were team drivers in their owner/operator trucking company. Although Vanita was little she was certainly capable in driving the big rig; however she loved watching the scenery from the passenger seat the most. She also loved working outside and in fact would much rather mow the lawn than do any kind of housework! She fulfilled that desire when she married her third husband, Gene Kean of Vichy, MO. The two worked together mowing and baling hay as a business in the rural Missouri town. Vanita is survived by one daughter, Marilyn Johnson(David) of St. Louis, MO, one son, Randall Yokley(Christy) of Luther, OK, three grandsons, Grant Yokley of Luther, OK, Timothy W. Johnson of St. Louis, MO and Tanner Yokley(Angeline) of Edmond, OK. Also survived by one sister, Edna Williams of Moore, OK and three aunts, Verda Armes of Oklahoma City, Emma Lou Hall of Oklahoma City and Anna Hunnicutt(Dink) of Waco, TX. She is survived by a niece, Rhonda Robison(Barry) and son, Ethan of Oklahoma City and two nephews, Estes Ward(Faith) of Colorado and Lee Ward of Tulsa, OK. Vanita included many in her “family” including all of the Yokley nieces and nephews as well as Troy & Carolyn, Roy & Erma, Bob & Linda, Susie & Kenny and especially Larry Yokley. Gertie Keenom was like a daughter to her as well as her children, Scotty W. Caldwell(deceased), Stephanie Harrison(Shane) and Cynthia Shields(Russ). Vanita was preceded in death by her parents, Ruth A. and Silas S. Ward, brother, William Alfred Ward and nephew James W. Baxter. Vanita lived a full life finding friends wherever she went and we will miss her, but look forward to being reunited with her in Heaven someday. Visitation is Friday, July 5, 2019 from 4pm-8pm at Ford Funeral Service. Funeral services will be held Saturday, July 6, 2019 at 10:00am at Candlewood Chapel.

Vanita Faye Weaver (nee Ward) entered the arms of Jesus on July 2, 2019. She was born on October 17, 1939 in West Monroe, LA to Ruth A. and Silas S. Ward. Vanita spent her childhood in Louisiana, Texas and Oklahoma where she graduated from... View Obituary & Service Information

The family of Vanita Faye Weaver created this Life Tributes page to make it easy to share your memories.

Send flowers to the Weaver family.