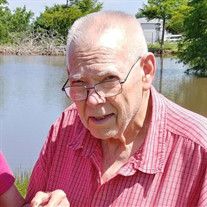 Weyman Lee Shaw November 19th, 1940 – March 1st, 2022 Weyman Lee Shaw, loving father, husband, son, and brother died peacefully surrounded by his wife, children, and grandchildren at his daughter’s home in Choctaw, OK on the 1st day of March 2022. Weyman Shaw was born November 19th, 1940, in Atlanta LA. to Leslie (Buddy) and Edith Shaw. He was raised as a boy in Atlanta and later graduated high school in Baytown, Tx. Following graduation, Weyman joined the U.S. Air Force. He Honorably served his Country through both the Korean conflict and Vietnam wars and dedicated 20 years of his life to service. Following his service to our Country, Weyman moved into the private sector lending his knowledge and skills to several different industries. Along with his many talents in the mechanical, electrical, and maintenance fields, Weyman was a phenomenal craftsman, artist, and teacher. He will be remembered by his family and friends as a gentle man with quick wit and patient wisdom. Weyman married the love of his life, JoAnn Shaw on August 7th, 1961, beginning a love affair lasting 61 years. He was a loving husband and amazing father. Together, Weyman and JoAnn raised three successful children, Leigh Ann, Frank, and Tracy. Weyman was preceded in death by his parents, Buddy and Edith, sister, Norma Jean, and son, Frank. He is survived by his wife, JoAnn; daughter, Leigh; son, Tracy; daughter in law, Tanja; 7 grandchildren, 10 great-grandchildren, and many, many cousins, nieces, nephews, and friends and others who were lucky enough to know him.

The family of Weyman Lee Shaw created this Life Tributes page to make it easy to share your memories.

Send flowers to the Shaw family.