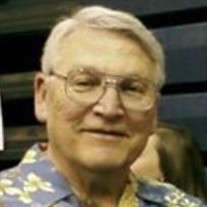 A very special and faithful servant, William “Bill” Bryant Morris, passed from this life into eternal life September 25, 2019 following lengthy health issues. Bill was born in Colbert, Georgia September 20, 1937 to Howard Paul Morris and Marietta Yon Morris. He is preceded in death by both parents, and wife, Mary Elizabeth “Libby” Jordan Morris. He is survived by son, Lee Howard Morris, daughter, Kimberly Michelle Morris-Butler and husband Christopher Butler, granddaughters, Michelle Blair Butler and Rachel Grace Butler, great granddaughter, Anniston Noelle Butler-Argraves, sister, Betty Gale Morris Scrimgeour, sister-in-law, Billy Morris Jordan, and many nephews, nieces, and cousins. Bill grew up in Kannapolis, North Carolina after his family moved from Georgia to work in the textile mill. He graduated from A.L. Brown High School in 1955, where he met the love of his life. After serving in the United States Navy for 4 years, moving multiple times during his 28 years of United States Air Force assignments as a computer programmer, the family settled in Oklahoma City, OK and he retired in 1986. Bill obtained his Bachelor’s degree from Southern Nazarene University in 1986 and worked Civil Service at Tinker Air Force Base, retiring in 2004. He had 50 years total of Federal service and received a letter from President George W.Bush congratulating him on his retirement. He loved serving as a deacon and Sunday School teacher at Sunnylane Southern Baptist Church, singing in the quartet, watching and listening to his wife play piano, attending his granddaughters sporting events and life events, ministering to family, friends and strangers alike, talking with his family, and studying the Word of God. He was most known for his deep love for his family and church, telling corny jokes, his friendly personality, and sweet smile, but most importantly, his love for Christ. His love of God was evident in how he lived his life and in the personal relationships he had. He is greatly missed. Visitation will be held Sunday, September 29th from 1 p.m. to 6 p.m. at Ford Funeral Home. Service will be held at Sunnylane Southern Baptist Church, SE 31st and Holiday Drive, Del City, OK, Monday, September 30, 2019 at 1 p.m. In lieu of flowers, donations can be made to Sunnylane Southern Baptist Church Ministry Fund, or to donor’s favorite charity.

The family of William Bryant Morris created this Life Tributes page to make it easy to share your memories.

Send flowers to the Morris family.