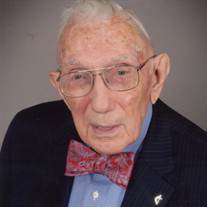 William (Bill) Hoff Mullins, Jr. Peacefully passed away surrounded by his family at the age of 88 (or “23 at least” as he loved to say) in Midwest City, OK on September 3, 2020. He was born on April 19, 1932 in Wetumka, OK to parents William Hoff Mullins and Ruby Pearl (Lawrence) Mullins. Bill attended and graduated from Oklahoma Agriculture and Mechanical College, now known as Oklahoma State University, in May of 1956. He received a bachelor’s degree with a major history and minor in math. Shortly thereafter he was drafted in the Army and served two years at Ft. Bliss, TX. He was honorably discharged. He then began work at Tinker Air Force Base as a civilian Industrial Engineering Technician. He retired as a supervisor in 1989. After retirement he loved volunteering at his church and at the local chapter of NAARFE. Bill met the love of his life, Evelyn Rae Biggs and they were happily married on March 5, 1960. They had just celebrated their 60th anniversary earlier this year. They had 3 beautiful children together: Diane Judy, Michael Mullins, and David Mullins. Bill was a loving husband, father and a true man of God. He loved his church, First United Methodist Church OKC and spent many years greeting all who entered the doors of the church. He loved tell everyone about the history of the church and about Methodism in general. Many people will remember him as someone who wiggled his ears at people to get their attention. Kids especially loved that. He also loved telling dad jokes and cheering for the OSU Cowboys, especially their wrestling team. He was proceeded in death by his parents, William Hoff Mullins and Ruby Pearl Mullins and a sister, Mary Louise Mullins. He is survived by his loving wife, Evelyn Mullins, his children: Diane Judy and her husband, Greg of Hudson Oaks, TX, Michael Mullins and his wife, Traci of Midwest City, OK and David Mullins of Midwest City, his 4 grandchildren: Larissa Szurek and her husband, Erik of Chicago, IL, Nathan Judy of Arlington, TX, Rachel Mullins of Midwest City, OK and Andrew Mullins of Midwest City. He is also survived by his sister Eula Faye Woods of Houston, TX and Robert Mullins and his wife Rena of Houston, TX. There will be a come and go visitation on September 9, 2020 from 9 am till 8 pm, with the family present from 5 pm till 8 pm, at the Ford Funeral Home at 305 S. Sooner Rd. in Midwest City, OK. A funeral service for family only will be held Thursday, September 10, 2020 at 2 pm at First United Methodist Church at 131 NW 4th St, Oklahoma City. Video streaming of the service will be provided through First United Methodist’s Facebook page or website. In lieu of the flowers, the family asked that a donation be made to First United Methodist Church. A celebration of Bill’s life will be held at a later date.

The family of William H. Mullins Jr. created this Life Tributes page to make it easy to share your memories.

Send flowers to the Mullins family.