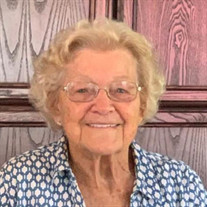 *** Wynema's service will be webcasted for those who are not able to attend. You can find the webcast link here on her tribute page under the 'Photos & Videos' tab. If you are joining via tablet or cellphone, you can find it under the 'Media' tab. The webcast video will be available to watch for 45 days following Wynema's service. *** Wynema Louella (Robinson) Crow, 94 went to be with her Lord in Oklahoma City, OK on January 21, 2021. At the time of her death, she lived in Prague, Oklahoma, with her beloved husband of 74 years, Tom Ryder Crow. Wynema was born on October 13, 1926, in Canton, Oklahoma to Mildred L. & Robert A. Robinson. Her brother and sister were twins, Carl & Carleen Robinson. In 1945, Wynema met the love of her life, Tom after her best friend coaxed her to attend a USO Dance in Norman, Oklahoma, saying “You should go, you might meet the man of your life”. At the same time, Tom was being coaxed by his friend to attend. They married on March 29th, 1947, just shy of 74 years ago in Oklahoma City. Wynema earned her Bachelor’s Degree from Hill’s Business College in 1947 and was employed by Traveler’s Insurance Company, and Tom was employed by Borden’s Milk before they went into business for themselves as Crow Appliance Sale & Service Co. Starting their business from the back room of Dunn & Glosser TV, their business grew and they opened their second store, Crow Arts, Crafts & Gifts. They remained in business until retirement after 35 years. Tom & Wynema had three children, Robert Michael, Janice Elaine & Glenda Sue. Tom and Wynema served their Lord by attending Meadowood, Sunnyside & Sherwood Baptist Churches for 73 years. Wynema is survived by husband, Tom Ryder Crow, 95, of their home in Prague, and their three children, Robert Michael Crow, 71 of Krum, TX, Janice Crow Ingle, 69, of Prague, OK & Glenda Crow LaFaver, 67, of Mustang, OK. She is also survived by her (8) Grandchildren, 18 Great grandchildren, and 4 Great-Great Grandchildren. Wynema was preceded in death by her parents, Robert & Mildred Robinson and her sister, Carlene Robinson Bates. Wynema was the most gentle, loving and supportive wife and mother that anyone could ever ask for. She was a wonderful Christian Wife, Mother, Grandmother, Sister and Friend, and she will be dearly missed. Life lived with this precious woman would have never been long enough. A visitation will be held at Ford Funeral Service on Sunday, January 24, 2021 from 1:00 PM – 6:00 PM. Wynema’s funeral service will be on Monday, January 25 at 11:00am in the Candlewood Chapel at Ford Funeral Service with a graveside service to follow immediately after at Fountain Cemetery in Canton, OK.

*** Wynema's service will be webcasted for those who are not able to attend. You can find the webcast link here on her tribute page under the 'Photos & Videos' tab. If you are joining via tablet or cellphone, you can find it under the 'Media'... View Obituary & Service Information

The family of Wynema Louella Crow created this Life Tributes page to make it easy to share your memories.

Send flowers to the Crow family.